*takes out earphones* I'm sorry, what?

Ever since the time skip, I’ve been more than a little curious what the Strawhats are now capable of. We’ve seen their methods of training and have gotten a few short glimpses into their improved fighting styles, but considering how many different techniques each character knew before, it’s clear that there’s so much we haven’t seen yet. That’s why I’ve been looking forward to these upcoming fights more than usual, and why I seriously hope the fishmen can provide a decent challenge.

Just against Hody’s grunts, we’ve gotten a decent display of the new abilities of the crew. My favourites last chapter were Sanji’s Sky Walk (particularly the story of how he learned it) and Franky’s new vehicles. There’s something incredible about watching Chopper driving around in a dinosaur-shaped tank and shooting mooks. Now we somehow managed to top that with Franky COMBINING his two vehicles into a giant mech. I have to admit I was grinning like a maniac during that whole sequence.

The only ones I weren’t crazy about were Nami and Usopp. Nami pulled out a beam of wind, but only managed to take out one enemy. She was doing more than that back at Enies Lobby, so it’s hard to gauge her current level of power from that. Usopp did a lot better in terms of damage, but firing bamboo stalks just seems rather plain compared to what he’s already done.

In terms of the upcoming fights with the New Fishman Officers, I’m hoping they give us more of a chance to see the abilities these last chapters have been setting up. Chopper vs Daruma seems interesting, as they’re both capable of fighting underground, and we have yet to see how Chopper’s other forms fare against him. What confused me a bit was the above page, which seems to imply Zoro fighting Dosun and Sanji fighting Ikaros. Previously, there was another officer who was set up as a skilled swordsman, so you’d think he’d be the one fighting Zoro. And with Dosun’s brute strength and tendency to power down without the steroid, he seemed like someone for Franky to face off with. Sanji vs Ikaros I don’t have as many problems with, although someone with multiple stabbing weapons feels more like someone for Brook to fight. There’s still time for those to happen, of course, but it’s a little odd they chose those characters, specifically.

I’ve been waiting for quite a while now to see how everyone has progressed. Now I think we’re on the verge of seeing it for ourselves. Here’s hoping it lives up to all the hype.

With the second season of Invasion! Squid Girl coming out in the Fall, I thought I would share some thoughts I had. See, after finishing the first season, I immediately tracked down the original manga and read what I could find online. It had some good moments, as well as some…not as good ones (“Ika gets a travelling bag.” WTF?). Recently, I looked through the chapters I managed to find and found those which I felt most needed to be in the second season. So here’s an early look of sorts at what could be waiting for us next season with the Top 10 Invasion! Squid Girl Chapters That Need To be Animated. END_OF_DOCUMENT_TOKEN_TO_BE_REPLACED

"The white lights you see now are the humans. Next are the red ones; the mutants."

Soul Eater is one of the few series where I’m genuinely confused as to what direction it’s headed. Of those, it may be the only series where I don’t feel that’s a bad thing. Normally, being that confused about where a series is moving means the writer may be just as confused as you, but I don’t get that feeling here. A lot has been going on lately, with the Book of Eibon and Crona both on the loose, and now we’re getting information about the Kishin after who-knows-how-long since his release.

What really threw me, though, was where he was hiding all this time. I always expected he was in a cave somewhere, sitting around while everyone went insane. But he’s been hiding on the MOON?! The big, smiling thing that’s been one of the most identifiable images from the series all this time? That…that I was not expecting. It honestly got a chuckle out of me. I’m not sure how the anime went, but I’m pretty sure it didn’t do THAT.

It’s a little odd how things are progressing, though. I thought that after the last arc and the recent chapters, the story was going to focus more on Crona. Maybe it still will, but it looks like things shifted over to the Kishin in this chapter. Maka and Soul use their soul wavelength to look for Crona and suddenly, the Kishin is there. Now, while they’re still looking for him/her, everyone else is focused on the bigger threat, which feels a little sudden after all this time with next to no new information. After all, wouldn’t you think the Kishin would be the last enemy you’d focus on?

This poses an interesting question, though: will the Kishin really be the last boss? With everything that’s been happening, someone usurping his position isn’t out of the question. After all, we all thought Medusa would come after Crona, and look what happened there (though I’m sure Medusa is still alive, otherwise what would be the point of taking Arachne’s body?). And what is the Book of Eibon up to? I’m honestly not sure, but I have a feeling more surprises are waiting in the next few chapters that may help us answer these questions. This is what I’ve slowly started to appreciate about the manga: you never really know what’s going to happen. 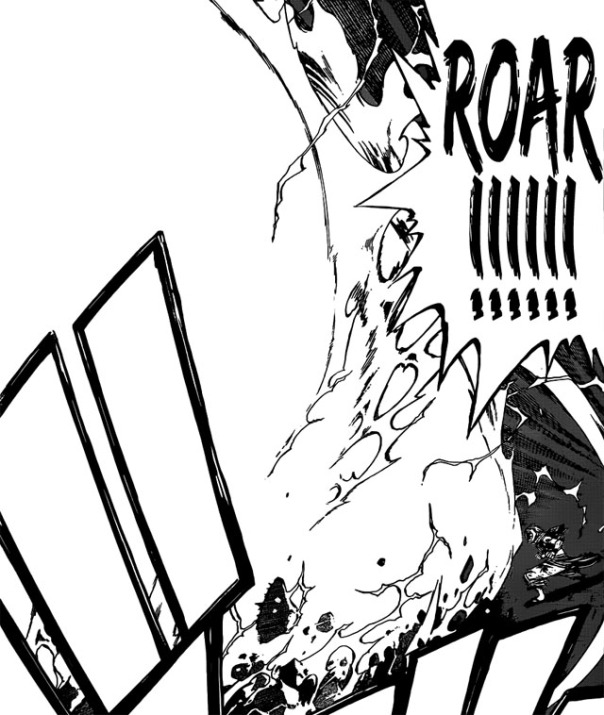 You know, when this arc started, I really thought part of the theme would be the guild working together as a group. It was something I wanted to see for some time, since the overall point of having a closely-knit organization like the guild should be how they work together. In the past, we’d gotten a taste of that (particularly in the fight with Laxus), and I was hoping we’d see more of that here. And…yeah, I guess we’ve seen some of that in this arc, but not on the level I’d hoped for.

The fight with Hades started off looking like it would involve the teamwork I wanted. You have a number of different characters facing the enemy leader at once, which is more than the previous arc required. It would show that the villain was strong enough to require a force beyond what was used in the past, which he’d need to be to beat Makarov. But no, that was not to be.

After a chapter of the group working together to try to beat Hades, he shrugged off all their attacks and started pounding on them until Laxus showed up. And since Laxus couldn’t beat Hades (he even said he probably shouldn’t, which I thought was a nice touch), he transferred his powers to Natsu, setting up a traditional 1-on-1 boss fight. And in this chapter, it turned out even THAT didn’t work. Of course it wasn’t too hard to see coming, since someone like Hades wouldn’t lose in the middle of a chapter.

At this rate, I’m not sure how the fight will actually end, especially since Natsu claims to have run out of magic (Drinking Game: take a shot every time someone says that in this story arc). Since Hades seems to be setting himself up as some sort of living magical nexus of power, it’s entirely possible he won’t get beaten this arc, but that still doesn’t explain how he leaves without anyone dying. The only other thing I can think of is that Cana’s new magic upgrade will actually do something to help save everyone. Right now, though, I don’t see any way that teamwork will help out. Maybe everyone gets down and prays for someone, but I doubt that counts as teamwork.