Yotsuba&! – Reach Out And Pet The Tiger

Some of my favourite chapters in manga, and in shonen comedies in particular, are the ones that show the interactions of characters who don’t normally get much time together. Now while Torako has had time with Yotsuba before, it’s almost always with either Asagi or her father as well, so the atmosphere is very different now. She was always the quiet, stoic type of character, which I suspect is why there have been so few scenes of her with only one other person. You can’t really get a good dialogue going when only one person is talking. END_OF_DOCUMENT_TOKEN_TO_BE_REPLACED 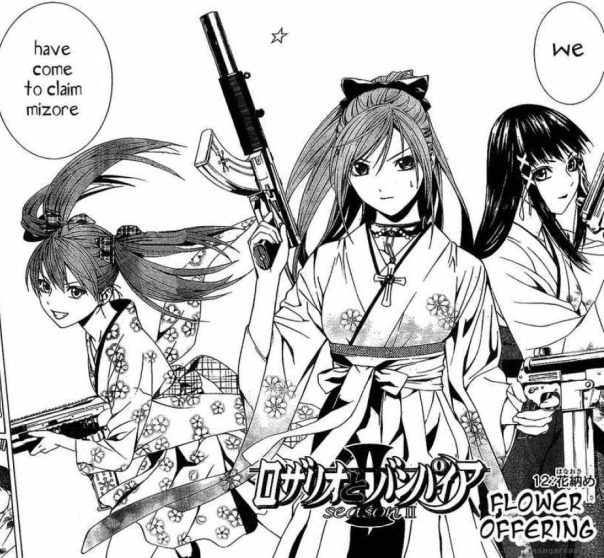 What a long, awkward trip it’s been. I remember back when I started this manga and it was just another boring harem series with various random monsters to fight. Since then it’s grown up into a surprisingly well done series about the relationships the previous series began, and it manages to provide a good amount of depth to what were previously uninteresting characters. It even manages to make the action more interesting, since it’s no longer just Inner Moka stomping on everyone. I’ve actually started looking forward to the newest chapters, which I would never have expected at first. END_OF_DOCUMENT_TOKEN_TO_BE_REPLACED 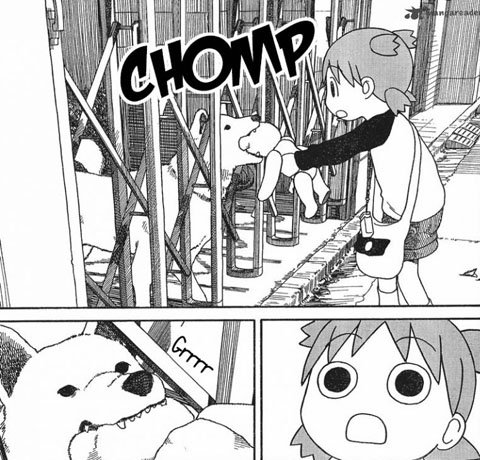 Mai-chan, you need to teach your dogs to stop biting people.

I think Yotsuba&! is really starting to take after its predecessor. Most other comedy series make it difficult to tell if time is actually moving forward, since not much ever changes between chapters. That was where Azumanga Daioh was different. You could feel that the characters in that series were growing older, even if you couldn’t see the changes in every chapter. It was all the little things, like Chiyo and Tomo changing their hair, or Sakaki slowly coming out of her shell. It displayed a growing sense of maturity that you couldn’t get just from saying the characters are a year older, like some manga. Azuma may have moved on to a new series, and it may not by as mature (which is saying something) but I feel that Yotsuba&! still has that same sense of growth. END_OF_DOCUMENT_TOKEN_TO_BE_REPLACED