It wasn’t until fairly recently that I managed to read all of Hayate the Combat Butler, though I’ve actually been trying to catch up for quite a while now. Got my first volume back in December 2009, if you can believe that. So I felt it was a good time to talk for a little bit about what I and most other readers consider the biggest and best part of the series.

It takes a skilled writer to be able to pull off a dramatic storyline in a series as heavy on gags as Hayate. I used to read webcomics a lot, so I know how bad it can get when less talented writers attempt it. And yet Hayate somehow managed to make it work during the Athena arc, and I think I know why. After talking with a few other fans of the series I know, it started to become apparent that this storyline didn’t just come out of thin air. There had been hints dropped all over the series to show that this was in the works for a while, up to and including having Athena appear for a few panels at least once. And with the story being in the mind of the mangaka for so long, that allowed a much smoother transition into the more dramatic parts of the story. It also meant that the character interaction, which played a major part in how the story played out, could build up to this part of the series and have a much greater payoff than if it had just been written on the spot.

But to me, what makes this arc work most of all is how is successfully keeps to the spirit of everything that came before it. It never feels melodramatic, the characters all still behave like themselves, and the series never feels the need to have an idol come out to preach the themes of the story to a piece of fruit. The manga could still poke fun at itself when it wanted to, and rather than having that take away from the mood, I feel like it was important for maintaining it. Hayate really can’t be too serious for too long without losing part of the charm it has. So when Maria starts forcing a horde of summoned demons to do the housework, for instance, it feels good and helps balance out the overall tone. When we know that no matter how much things change, the stuff we loved is still there, it makes the story come across a lot better.

So to sum up, this is why the Manglobe adaptation doesn’t work. They don’t know how to use the adapted material to their advantage or how the mood of the plot should be. Factors like that are the difference between a successful dramatic storyline and a bad one, and it shows just how easily the Athena arc could have gone downhill. I’m very glad it didn’t, because it was one of my favourite storylines this year, and I’m looking forward to what happens with these characters next. 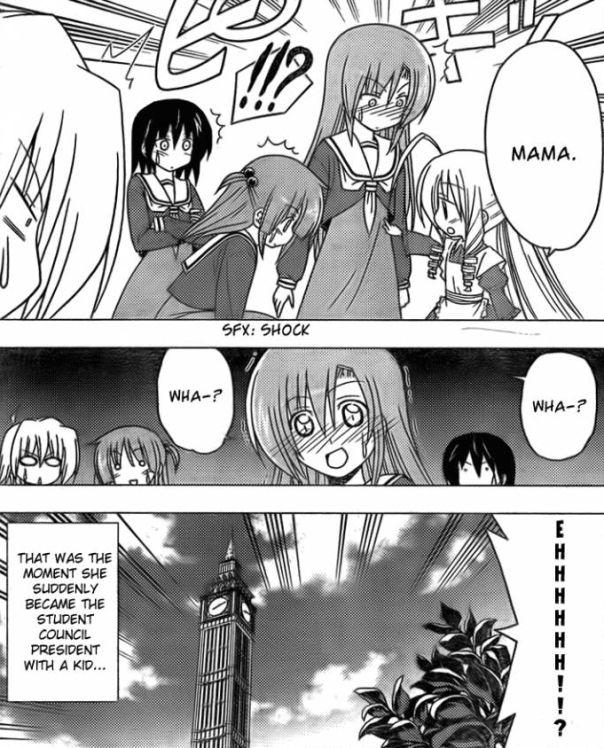 …even if it looks like I’ll have to wait a while.