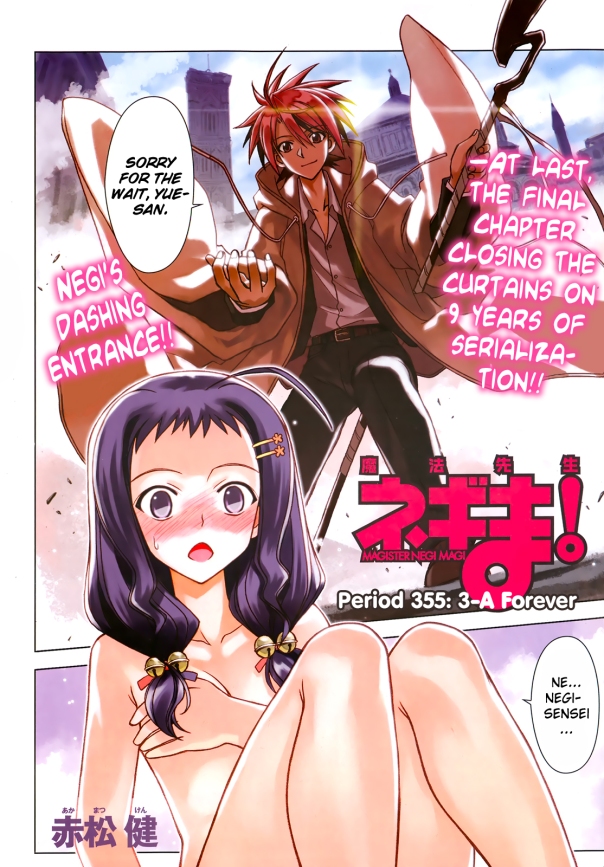 I still haven’t gotten used to the feeling of a manga I’ve been reading suddenly coming to an end. I know lots of popular series that have ended this year, like Bakuman, REBORN, Zetsubou Sensei or Air Gear, among many others. Of those I’m reading, only three came to an end in 2012, and I don’t think any of them felt like the traditional ending of a manga. I knew Bokura ga Ita would be ending long before I got caught up, and BARRAGE didn’t last long enough to have the proper impact. Of course the big finale that happened this year, and the one I wanted to briefly touch on one last time, is the ending of Mahou Sensei Negima.

Right after the series finished, I felt very angry and betrayed by what happened, though not to the extreme levels I saw some fans reaching. I was mainly able to distract myself from that by focusing on the rest of my experience with the manga and how great that was. Now that a lot of time has passed, I can more easily look at this sudden ending as a part of the greater whole of the series. I can still remember everything I enjoyed better than everything I didn’t, which shows that I didn’t become entirely jaded by how things concluded. In fact the more I think about it, the more the ending has me feeling curious rather than angry.

How would things have gone if the series continued? I have a few scattered ideas in my head, but it’s still hard to say how you follow up an arc like the Magic World. I know the focus would shift to finding Nagi, but aside from him Negi had essentially reached the peak of the power curve, so fights would have been difficult. The series also tried to ignore the question of what happened to Negi’s mother Arika, but I always just imagined her sleeping inside some Snow White-style glass coffin. Anything else I could think of is just random little ideas, like how Setsuna’s epilogue mentioned her piloting a space cruiser and I imagined her driving like Seta from Love Hina. On some level, it can be good when the finale of a series keeps you thinking about it in little ways like that. I would have preferred an actual conclusion, of course, but as long as I still remember the series fondly I can live with what we were given.