← The World God Only Knows – Review
That Anticlimax Was Rather Anticlimactic →

Mahou Sensei Negima – The Calm Before The End 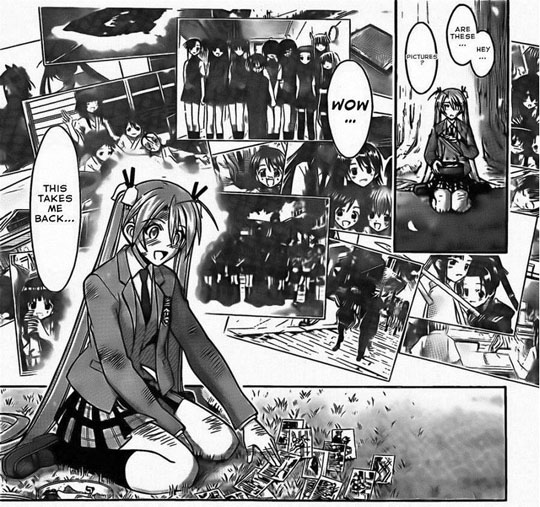 Much better than a clip show.

Here I was thinking that Bokura ga Ita was the only series of mine to be ending. It’s an empty feeling when you suddenly learn a story you really like is about to end. I don’t even remember the first place I learned about it, but I do know I checked five different sites just to make absolutely sure it’s true. I mean, how the hell could you end a series like this in four chapters? There’s still too much that needs to be dealt with!

As for the actual ending, the story has taken a very bizarre turn in an attempt to get any sort of conclusion out of things. Having Asuna wake up and find out all her friends have passed away – including the ones she thought would still be alive – is not the attitude you end a series on. Luckily we get some hope of a happier ending with the appearance of Chao (and Eva, whose longevity I unintentionally foreshadowed). The general consensus is that Chao intends to take Asuna back in time so she can still be with her friends. I personally believe this is true, since there are too many details present for things to just end on this kind of somber note. Why would Asuna oversleep and Ayaka live until the original day she was to awaken if there was no point to it? These seem like details you only put into your story if you know for a fact they can be undone.

There’s one thing that’s still on my mind, though. It’s highly unlikely that this specific timeline had Asuna go back and live with her friends. Ayaka’s final letter would make no sense in that case, even if she is faking. So this means her going back would make a new timeline, and this one really did exist without her. Okay, I can accept that. The problem is that this means Chao exists in a timeline where Asuna doesn’t. Which begs the obvious question: who the hell did Negi marry?

Maybe I’m just grasping at straws. Maybe this is the same Chao from Timeline #1, although my head hurts trying to comprehend if that Chao being Asuna’s descendant is even possible. But I was hoping for a non-stereotypical ending where Negi gets together with someone who isn’t the female lead, and as long as there’s any real chance of that, I’m gonna stick with it. It did always strike me as odd how little interaction Asuna really had with Negi in the magic world, so maybe there is some precedent to this theory. Of course I can practically see the ending right now being the two of them having a tearful reunion and kissing, so maybe the odds aren’t that great.

Whatever is going to happen, we won’t have to wait very long to find out. There are only three chapters left before the end of this series, and while I don’t know what may come afterward, I’m still having trouble thinking about Negima not being around anymore. It was one of the manga that got me interested in them. There was so much I still wanted to discuss about the series, but soon I won’t get the chance. I was hoping I’d actually get the chance to name a post “Can I take Nodoka home? She’s so cute!” The next chapter is out at the end of the month, and I should be covering the last few chapters as they come. Here’s hoping for a nice, satisfying conclusion .

← The World God Only Knows – Review
That Anticlimax Was Rather Anticlimactic →