This is one post I didn’t think I would have to write for a long time. Mahou Sensei Negima was one of the series that got me into manga to begin with, and I was sure it would be around for so much longer. Of course a part of that is because the ending felt so rushed and there was so much left unexplained. A lot has been said about this ending, most of it negative. I can see where all of that comes from, since I know I wanted so much more from the conclusion. How come we didn’t see Nagi come back? Why don’t we know who Negi liked? These are some of the building blocks of the whole series and they didn’t get the resolution they deserved. Clearly this series doesn’t know how to end things.

But you know what? I’m not gonna talk about that. This kind of post is something I’ve had planned for a long time, and I knew that I wanted to do a retrospective on the whole story. Regardless of how it ended, this is going to be my last post for the series before the eventual review, and I don’t want it to be a negative one. I wanted to talk about the series I’ve been reading for over two years, not the one I read for a month or so. Because there is still a lot to say, and even in this chapter the manga I love can still be seen.

Let’s start with our protagonist, Negi Springfield. He was always a fascinating character because it was clear from early on that he was smart and had serious issues to deal with, which was a far cry from most shonen heroes. That intelligence was one of his greatest assets and, quite often, his biggest weakness as his tendency to overthink led to a lot of self loathing. As much as his students grew a lot by being around him, it was their companionship and guidance that led him down the path of a true hero. This series wouldn’t have worked nearly as well if not for a lead like Negi, who always knew how to solve his problems no matter how complicated they got.

And while we’re here, let me just say that my biggest regret with this manga is that I still can’t pronounce his name right! I’ve always say it like “regime” or “Neji Hyuga” because the proper way sounds too much like “Eggman”. Sorry, Negi.

The characters have all grown up a lot since the humble beginnings of the story. Nodoka went from a shy little bookworm to a hardened adventurer. She became wiser, more outgoing, and her bosom would make you dream. Yue started out as something of a side character, but eventually she gained her own story, her own dreams, and the power to stand up for herself. While I would have liked either of these two to have ended up with Negi, the fact that they still have each other makes their personal ends still have weight to them. And Haruna…is still Haruna, albeit a little less insane.

I still remember when Setsuna went out of her way to avoid Konoka, since she never saw herself as worthy of friendship or affection. It was thanks to Negi that she was able to start down the path of “redemption”, as she would say, but Konoka was really the one doing the work. Not only was Setsuna able to believe in her own ability to protect those close to her, she was able to see Konoka as capable of being on the battlefield next to her. For someone who devoted her life to combat, that’s love right there. The endings they get are also rather interesting. Setsuna ended up marrying someone in the year 2017. Konoka, in an amazing coincidence, also married someone that year. Heh, nicely played.

Chisame’s ending is easily the most confusing. A big part of her character development is how she slowly became more involved with the magical side of the series, and how deep down she liked all the stuff she was in the middle of. To go from that to a hikikomori doesn’t feel appropriate for her. Hell, this steady development was a big part of why I wanted her to be the one Negi liked. If something like a love confession were presented to her, it could be the sudden push she would need to be true to herself. Still, I suppose it’s better for someone like her to be a hikikomori than a NEET, since she still does get involved in her own little way.

Hakase married Kurt Godel?! Wow, did not see that one coming.

In a way, Chachamaru is the big winner in the “Who gets Negi?” competition. Several of the other ending openly state that the girl in question did not wind up with Negi and probably never would. With Chachamaru, it openly states that she worked with him constantly and got wound up all the time. Of course with Negi at the age of 17 in the final chapter, I assume he eventually found out how the winding makes Chachamaru feel. Can we assume he kept doing it even after finding out? I know this isn’t much, but I see it like a poker game where she got a pair and everyone else got nothing. It isn’t much, but it’s still a win. Not bad for a girl who started out rather mindless. If we were to consider her the winner in any capacity, then I think her journey to becoming a girl with real feelings and a soul earned it for her.

I just want to briefly say that if someone made a series centered around Mana, I’d read it. She’s much more interesting than her overall importance would suggest, being a freedom fighter with a lengthy past and future of combat. She’s also one of the least fetishized characters, which pleases me far more then it should.

People love to talk about Evangeline, don’t they? Of all the badass, curb-stomping vampires out there, she’s easily my favourite (and that’s including Alucard, Inner Moka, everyone from Vampire Knight…). She didn’t get too much screentime, but what time she did get was more memorable because of it. She even has a good amount of character development, starting out much more antagonistic and impersonal before personally seeing to the growth of Negi and many of his students.

Also, it just occurred to me that Eva was the final opponent of the series, just like she said she’d be. 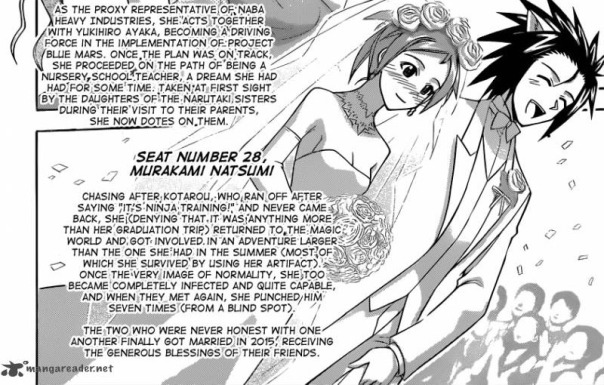 Can you believe the boy who was once lapdog to a minor villain could turn into not just a hero, but the love interest for someone as human as Natsumi? I think it’s very nice how things ended up, and while I would have liked to actually see that eventual confession, I’m glad Natsumi was able to get it accomplished herself. She was always someone practically invisible, as people joked when she got her artifact, and for some time she was the token human character, whose fear clearly demonstrated the situations she was in. So to not only become more confident, but to gain the skills needed to punch Kotarou seven times (from a blind spot), is very impressive.

Chao really should have been around more. We only discovered after she left how important she really was, and I feel like she could have been much more directly involved in things.

Ayaka was also someone I felt was underutilized. Even though I admit I found her antics to be a little annoying, she came across as the sort of figure you’re sure will become important one day. I had a few theories regarding what she might turn out to be, but thinking back on it, it was likely never anything so extravagant. She’s just your regular, everyday ultra-rich businesswoman with a crush on a ten-year-old.

Last, but not least, we come to Asuna. Once a tsundere schoolgirl, now a princess with the power to erase the magic world at her fingertips. As much as I didn’t want an ending where she got together with Negi, it was great to see them together. They clearly had a lot of respect for each other even beyond their bickering, and it showed more and more as the series went on. Their fight with Evangeline was a great example of this, as she was perfectly willing to jump into battle against one of the fiercest creatures in the world for his sake, no questions asked. They weren’t around each other very much in the Magic World arc, but we still got to see the lengths they would go to for one another. Somehow I don’t see Naru doing the same for Keitaro.

As much as I hate to wrap things up, it has to end sooner or later. I’ve been with this series for a long time, and it’s very sad to see it leave. I could never have expected it would be cut short like this (dear GOD, did I not expect it), but I know that I’m always going to remember it. Even with the rushed ending, it shows that sometimes the journey is more important than the destination. And what a journey it was. I’ll be keeping an eye on whatever Ken Akamatsu has planned next, though I can’t make any promises what will happen in terms of blogging.