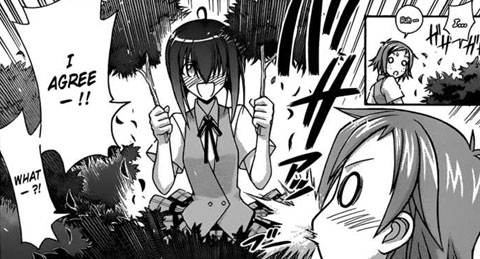 After increasing her Escape Artist, Gather Information, and Use Magic Device, she had a point left over for Hide.

In general, I consider myself the kind of person who doesn’t like yelling at things I like. If I consider something enjoyable enough, I’ll try to give it the benefit of the doubt most of the time. That’s a big part of why I didn’t post anything about the last two chapters of Negima, since if I did, it might have sounded like I had a personal blood oath against it. I understand that Ken Akamatsu wanted to finish the Magic World arc before the movie came out, but the man really needs to take some time management courses if that is how he works under a time crunch. However, this last chapter has proven that the ending of this arc had a bit of a silver lining.

The general consensus of the last story arc is that while it was entertaining, it did overstay its welcome. This has actually been a problem with the series for a while now, as the Festival arc dragged on in much the same way. You could almost consider it part of the writing style for the series, since each long arc consisted a number of lengthy events that were different enough to be considered arcs of their own. The difference between the two, though, is that the Mahora Festival was primarily about the school and the students, so it was like a natural extension of the events that preceded it. The Magic World arc, though, was completely different from the other story arcs because it changed the setting and overall tone of the story so thoroughly.

Now, while a change like that can work in the short run (see the Edolas arc from Fairy Tail), maintaining that change for too long can result in massive burnout. The readers came to expect something they just weren’t getting anymore, whether it’s humour, certain characters, or just a specific kind of experience. After the mystery surrounding the whereabouts of the cast concluded, and after the adrenaline from Negi vs Jack Rakan wore away, we were all just tired and wanted to go back to the school to relax. The attack on the enemy stronghold lasting over a year was a little too much to take, even before the enemy reinforcements started arriving in waves.

This is where the silver lining of the abrupt ending comes in. After spending so much time on that last story arc, I think it was for the best that we got ANY sort of ending. Even if Akamatsu had to make the ending as abrupt as it was, it seemed like he had difficulty reaching the ending and eventually just powered through. The actual events of those chapters – Asuna reversing the Code of the Lifemaker, everyone coming back, and the “Everyone’s okay” celebrations – would likely have been a fairly standard ending, even if the pacing were normal.

I also think one large complaint about those chapters was that they appeared to ignore the actual repairing of the Magic World, which this chapter shows was not the case. Asuna’s appearance was not quite the magic reset button that some people assumed, and we’re starting to see how much work still needs to be done before Negi can finally rest.

The return to Mahora means we can get the chance to see the kind of stories we’ve been missing. So far, we’ve seen evidence that Ayaka will play an important role in the chapters to come, which will hopefully make up for her lack of screentime in the last story arc. We’ve also seen part of the dynamic between Fate and the other students, which I’d love to see developed further.

Actually, one last thing I’ve been thinking about. Assuming Fate doesn’t become a permanent part of Negi’s harem…does anyone else see him getting a love interest of his own? I mean, Kotaro partnered with Natsumi after becoming good. Maybe he’ll just be in contact with his old teammates, but who knows. As odd of a comparison as it is to make, I’m imagining a Kimi ni Todoke scenario where the first person who doesn’t treat him with hostility becomes his love interest. I’m curious what other people think about that.