Deadman Wonderland – And We’re Back

It’s been a long wait since the last chapter of Deadman Wonderland, so I thought I would give a quick little recap for those who have forgotten what’s going on.

Meet Hagire. He’s a dick. He wants to fully unlock the powers of the Wretched Egg because…I don’t know, science? The other Deadmen have gone back to what remains of the prison in an attempt to stop him, because the Wretched Egg awakening would likely wreck Japan. Ganta and Crow got into a fight with Hagire that left him mostly dead, but Yosuga helped him get back on his feet, albeit in what turns out to be a much more decrepit state than before. The last chapter ended with Ganta putting together a plan to shut down the Mother Goose system that regulates the powers of the Wretched Egg so he can bring Shiro back and stop Hagire. And if I remember correctly, I don’t think the plan made all that much sense even last year.

I was expecting some kind of recap from the story itself after being gone for this long, but I’m actually kind of glad it didn’t include one. I can’t speak for everyone here, but for the most part I had a vague memory of how the series left off before the break. I may have just remembered it as “We’re gonna go to a place and fight some guys” but that worked out well when the new chapter starts with “We’re at that place and we’re about to fight those guys.” It was a simple opening to the chapter, aside from featuring one of Hagire’s philosophical rants. But even that worked out for getting the reader back into the mood, since it reminded us that the series likes talking to itself. 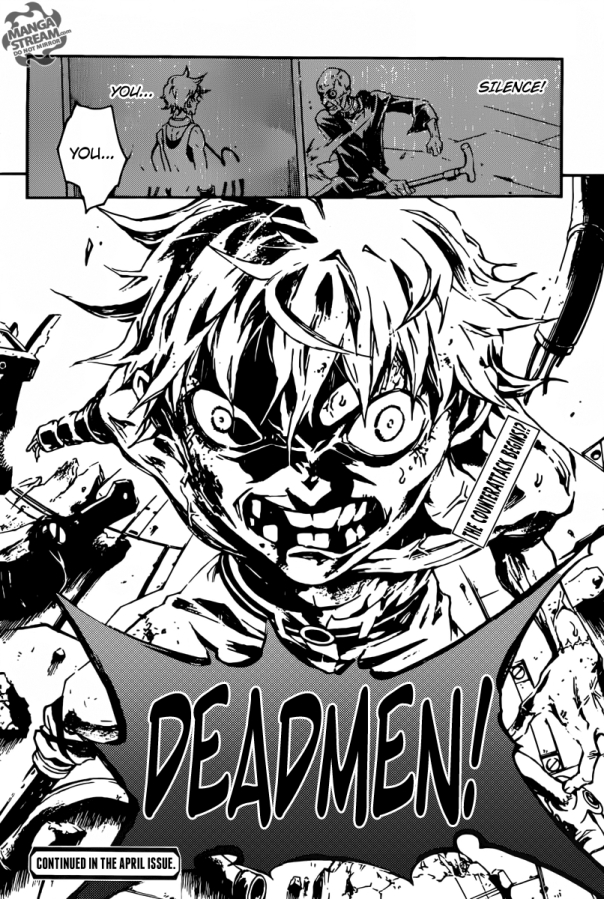 In terms of actual content, it was a fairly simple chapter. Ganta attempted to enter the Mother Goose system before Hagire showed up in his new demented form to ruin everyone’s day. I was very happy to see that the other characters all got the chance to actually contribute to this fight rather than sit around and make Ganta do everything. Not only would that be far too cliche, but with Ganta having already beaten Hagire a few chapters back, it would have felt repetitive to bring him back for that. The battle could still go either way, but Hagire’s quick breakdown makes it pretty clear that it’s the end of the road for him. This kind of rage only comes from such an insane character when they are close to death, and now it’s merely a question of who is going to be the one to bring him down. My money’s on Wretched Egg doing it because he’s no longer useful to her.

I know I bring this up every time I discuss the series, but it feels like it won’t be very long before it finally ends. In chapter count, if not in actual time, at least. There isn’t much else for the characters to do that can’t be done in that room, and after being gone for a year I have to wonder if Kataoka just wants to wrap things up and get back to taking care of her new family. At least we know she’s had a lot of time to think about how to finish everything, so the chances of a satisfying ending are much greater. In theory, at least. I’ll keep my fingers crossed.