Deadman Wonderland – Do You Want To Die? [YES]/[NO] 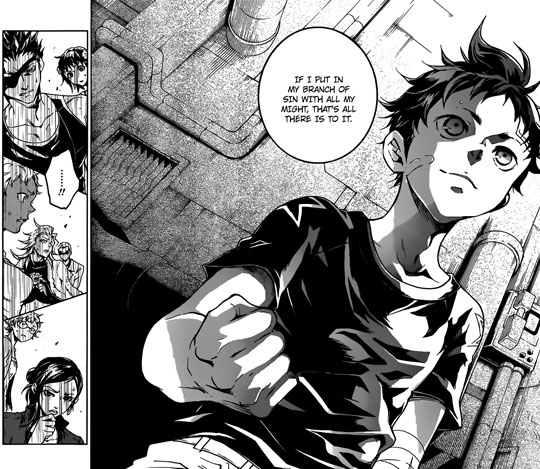 This sounds an awful lot like the thing you've been trying to STOP.

And so the pieces have fallen into place. From the information put forward in this chapter, I have a fairly good idea of how the next few chapters will go. According to Ganta, his Branch of Sin, which is what Hagire wanted in order to release the seal on the Wretched Egg, is also the one thing that can strengthen the seal. Based on this, he’s decided the best course of action is to plug his ability into the Mother Goose system and hope really hard that he can bring Shiro back, rather than accidentally unleash a walking natural disaster. And based on the look on his face in that panel, he’s pretty confident that this plan is in no way stupid or reckless.

Those of you who can understand all the terms I just used are probably aware that this isn’t the best course of action. However, it does seem to be where the story is currently headed. From my understanding, there’s no reason for the story to take any other path. The problem is what happens after Ganta reaches the Mother Goose system. In my mind I’m picturing a dial with two unmarked settings. One leads to a good end, and the other to a bad one. Ganta reaching that dial is as far as I can plan ahead, but I’m not sure which ending he’s going to get.

This is the sort of series that could have any kind of ending. The incredibly dark subject matter suggests that a bad ending is all but inevitable, but the large number of characters that have survived up to this point suggest that the ending will be more upbeat, even if it’s still somewhat somber. I highly doubt the ending will be 100% happy, but at the same time I worry that it will try to be as dark as possible. There’s a particular pet peeve of mine where a series can become so dark that it becomes highly predictable, which can easily ruin any tension the series can have. So it’s less about a sad or happy ending and more about sad or bittersweet.

At the same time, I wonder if simply having everything work out in Ganta’s plan could result in that bittersweet ending anyway. If Ganta defeats Hagire’s plan and gets Shiro back, then what exactly is waiting for him afterward? He has no family to welcome him in or friends to go back to. This chapter even implied that his health is rapidly deteriorating, so it’s not like he has the most promising future ahead of him. When you think of it like that, having Ganta succeed here isn’t outside the realm of possibility. Of course this means the best and worst endings aren’t that different, which does hurt the dramatic tension quite a bit.

I’m learning more and more that these kinds of series aren’t meant for me. Whether you’re religiously upbeat or religiously dark, the issues of being predictable and underwhelming are essentially the same, though at least the upbeat shows don’t seem smug about the tone they set. Whatever the case, I’ve made it this far and I would like to see how things wrap up, even if it’s not likely to make me burst into tears.

You know, looking at the series like this, I think I’m beginning to understand why so many people talk smack about it.