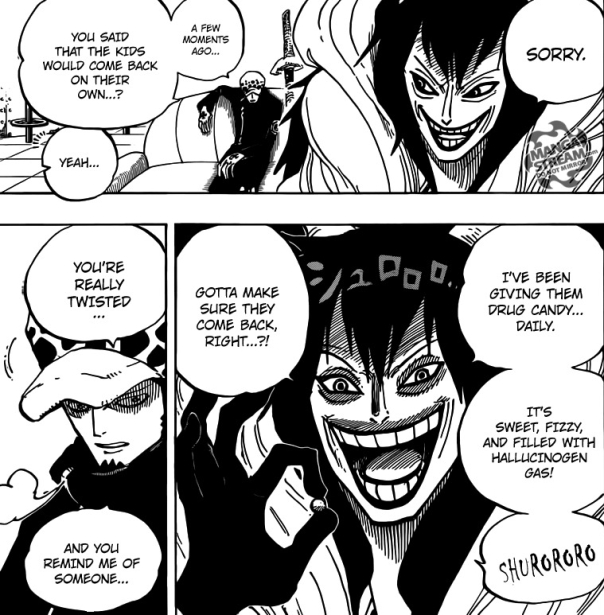 People like to knock shonen and call it much simpler than other genres, but the truly great ones can create interesting drama and characterization as good as anyone else. Just this year I got to see Yoshikage Kira, the Phantom Troupe, and possibly the board chairman from Assassination Classroom. The character I wanted to discuss for this post, though, is the most recent One Piece villain, Caesar Clown. Through a combination of deception and a special brand of insanity, he manages to set himself apart from his predecessors and show how entertaining a mad scientist can be.

On the surface Caesar doesn’t sound like much. He’s a mad scientist who got kicked out by the World Government because even they didn’t want him, and he’s developing powerful weapons to sell on the black market. He’s kind of like an unhinged version of Koko from Jormungand, if Koko had eaten the Gas Gas Fruit and gotten high off the juices. It’s in the way he interacts with other characters that allows me to appreciate him much more as a villain. The people who work for Caesar practically worship the ground he walks on because he’s so thoroughly convinced them he’s their savior. He gives drug-filled candy to kids both to experiment on them and so that they won’t run away. When you see withdrawal symptoms in giant super-powered children, you know the man behind it can only be a cruel bastard. But it’s the way he can go from cruel to suave when the need arises that make him so amazing to watch.

And yet somehow, despite all of that, he is still capable of being the center of comedy. The art style of One Piece hits another home run by letting him look as nutty as humanly possible pretty much all the time. While this is sometimes used for horror, the big payoff is in his epic facial expressions. The fights with Luffy in this arc are a little more one-sided than I might have liked, but when the person being punched can sell it like Caesar, I find it hard to argue about it. So from the combination of terrifying behaviour and a hilarious attitude, I think we can safely call Caesar Clown a successful One Piece villain. Fingers crossed that he gets a good seiyuu for the anime.