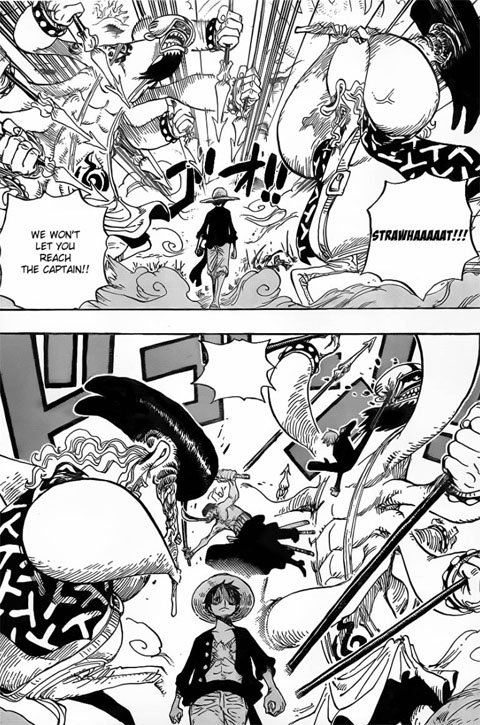 *takes out earphones* I'm sorry, what?

Ever since the time skip, I’ve been more than a little curious what the Strawhats are now capable of. We’ve seen their methods of training and have gotten a few short glimpses into their improved fighting styles, but considering how many different techniques each character knew before, it’s clear that there’s so much we haven’t seen yet. That’s why I’ve been looking forward to these upcoming fights more than usual, and why I seriously hope the fishmen can provide a decent challenge.

Just against Hody’s grunts, we’ve gotten a decent display of the new abilities of the crew. My favourites last chapter were Sanji’s Sky Walk (particularly the story of how he learned it) and Franky’s new vehicles. There’s something incredible about watching Chopper driving around in a dinosaur-shaped tank and shooting mooks. Now we somehow managed to top that with Franky COMBINING his two vehicles into a giant mech. I have to admit I was grinning like a maniac during that whole sequence.

The only ones I weren’t crazy about were Nami and Usopp. Nami pulled out a beam of wind, but only managed to take out one enemy. She was doing more than that back at Enies Lobby, so it’s hard to gauge her current level of power from that. Usopp did a lot better in terms of damage, but firing bamboo stalks just seems rather plain compared to what he’s already done.

In terms of the upcoming fights with the New Fishman Officers, I’m hoping they give us more of a chance to see the abilities these last chapters have been setting up. Chopper vs Daruma seems interesting, as they’re both capable of fighting underground, and we have yet to see how Chopper’s other forms fare against him. What confused me a bit was the above page, which seems to imply Zoro fighting Dosun and Sanji fighting Ikaros. Previously, there was another officer who was set up as a skilled swordsman, so you’d think he’d be the one fighting Zoro. And with Dosun’s brute strength and tendency to power down without the steroid, he seemed like someone for Franky to face off with. Sanji vs Ikaros I don’t have as many problems with, although someone with multiple stabbing weapons feels more like someone for Brook to fight. There’s still time for those to happen, of course, but it’s a little odd they chose those characters, specifically.

I’ve been waiting for quite a while now to see how everyone has progressed. Now I think we’re on the verge of seeing it for ourselves. Here’s hoping it lives up to all the hype.