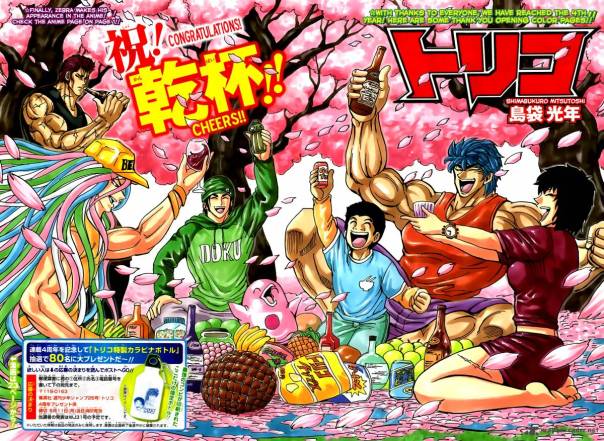 As I’ve read more and more series from Weekly Shonen Jump, I’ve come to realize how they can make amazing series out of the most ridiculous premises imaginable. Just among their well known manga, we have the story of the rubber pirate who wants to rule the ocean, the intense mystery case of the magic killer notebook, and the gun-crazy extortionist who dreams of making the world’s greatest football team. After a while, nothing they came out with could surprise me, which is why I’m glad I first heard of Toriko so long ago.

Food is the most important thing in this world by far. It’s what 90% of the world’s economy revolves around, if not more. One of the most highly respected jobs in this world is that of the Bishokuya, or “food hunters” who gather the special ingredients that are too tough to be obtained through normal means. Our protagonist is one of these people. Armed with only his intense love for delicious food – and the hundreds of millions of yen he’ll make – Toriko and his new chef Komatsu go out in search of rarer and rarer ingredients. With luck, they’ll be able to get their hands on them before the criminal organization the Bishokukai can use them to manipulate the hungry citizens of the world.

Our main character is a hero with a mission, and that mission is to explore the world searching for the tastiest things he can find. It may be improper to use video game terms, but the best way to describe the genre is Action/Adventure. When you look through the world of Toriko, you can see plenty of bizarre and interesting sights limited only by the creativity of the author. So even though the promise of the world’s tastiest cola may not appeal to many people, seeing the characters travel through the desert and into the depths of a gigantic killer labyrinth to obtain it are what make it all worthwhile. Of course the series goes the extra mile to make every single scrap of food and drink look as appetizing as possible, so I would definitely say to avoid reading when dinner is far off.

What I find impressive is the variety of the different story arcs. Each one centers around a single ingredient of choice, but beyond that there’s quite a bit of freedom in how to obtain them. In spite of being an action series at heart, and while most stories have at least a little action in them, there are only a few occasions where the formula of “Beat the guy to get the thing” is used straight. The challenges can be anything from rival bishokuya to the environment to their own feelings toward food. And through it all, I honestly can’t think of any story arcs I didn’t like. I’m having a hard enough time picking out which was my absolute favourite because there are so many that are good for a variety of different reasons. There’s the Century Soup arc for all the different action scenes, the Bubble Fruit arc for exploring how people look at food, or even the Meteor Garlic arc because I’m a fan of Liar Game. Yes, Liar Game. I meant it when I said variety.

Of course the series doesn’t shy away from the action when it wants to. There are much less fights when compared to most other shonen, but this does make them feel much sweeter when they finally appear. The series also usually avoids the common trap of having the action be too cluttered to make out by giving each individual impact space on the page to flow. This leads to moments like the above where a single punch can take up a whole page, and the effects of that punch can last for several panels or even pages after (the multi-hit Nail Punch is a common example of this). It makes for visually intense fight scenes that compare very well to even the best action series out there. It’s also one of the only manga I can think of where the loss of a character’s arm actually feels like it hurts, and that just makes it more amazing when the character continues to fight using the remaining part of that arm!

While I enjoy the individual arcs, the way the series transitions from one to another makes it so that the overarching story never gets to develop much. This isn’t like the One Piece scenario where the different stories will eventually come together to make one cohesive whole, or at least that’s not what it feels like. There are hints of a bigger story and some long-term character motivations here and there, but for the most part we’re currently just getting to see everyone hunt for the ingredients of the week, even if that is entertaining on its own. It’s definitely in the best interests of everyone reading to not be in a hurry for answers, because while the foreshadowing we do get should pay off eventually, it’s going to take some patience before we get there.

There is one question that I would like answered, though, and that is when all the important characters will show up again. Sadly, Toriko is one of those manga where the cast likes to switch in and out between different story arcs, so aside from Toriko and Komatsu we’re lucky if we get to see two or three old faces at a time. With at least five other characters repeatedly showing up in promotional material as main characters, that’s more than a little depressing. I do believe we’re being slowly led toward a point in the plot where everyone will get to appear more often, but that could still be far away.

One other thing I would like to mention is probably what keeps a lot of people away from this manga: the artstyle. Depending on the scenario, it can turn from fairly normal looking to…well, this. 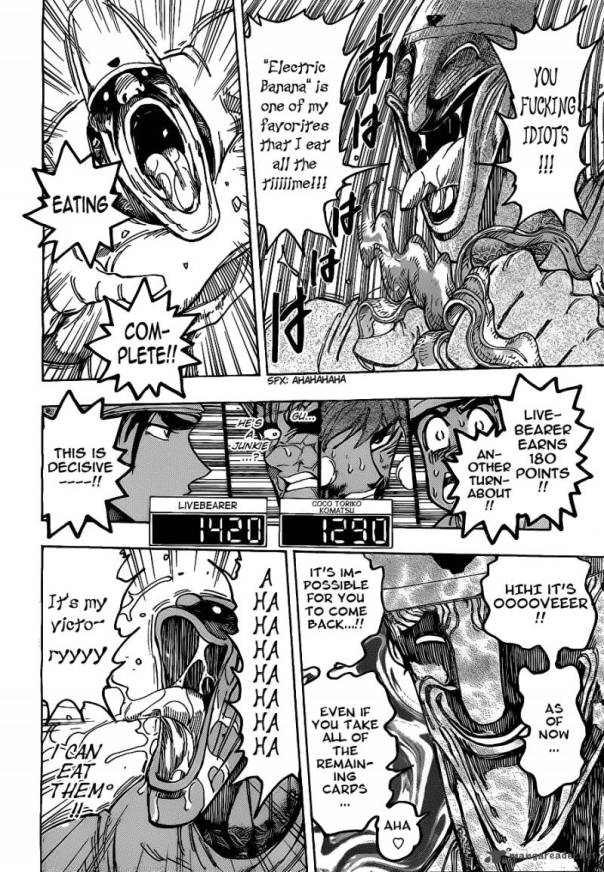 I like how the more normal artwork can contrast with the crazier people and creatures to showcase how crazy this world really is. The line between simple and horrific can get a little blurry at times, but for the most part you’ll never need to ask which character is the villain in any confrontation. I wanted to discuss this mainly because of how hard it can be to get used to this kind of artwork. It’s easily at its craziest early on, since the art used to be much sketchier and the creatures more insane looking, but it never comes close to traditional shonen. I also know how there are people who like to avoid this kind of muscular character design, which admittedly kept me from reading for a while as well. Just know that things are at their strangest toward the beginning, so if you can get past that, reading should only get easier. Alternately, what I’ve seen of the anime has much smoother and more welcoming art, so maybe that could work better for some of you.

Toriko can be a very simple or very difficult series to recommend. It’s one of those manga that quickly figures out what it really wants to do and does the best job anyone could imagine. Because of that, it seems easy to just say what it does well, but there’s more that goes into it than words can easily describe. I’ve realized how difficult it is to summarize the entire series into one paragraph, so I suppose I’ll just finish off by saying to try it for yourself and see how it operates. It’s one of my favourite manga, and it’s sad that it doesn’t get the attention in the West that it should.

Highly Recommended: Fans of Fist of the North Star, anyone who doesn’t mind the Monster of the Week format

Not Recommended: Those who prefer shorter stories, anyone seriously freaked out by that last page