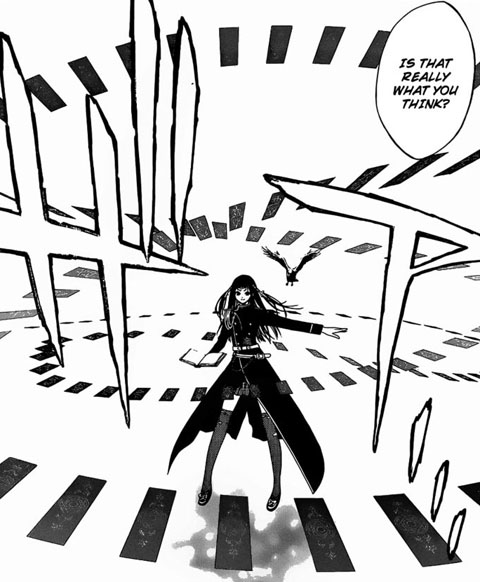 A friend told me you had to be masochistic to play Touhou. I don't think this is what he meant.

There’s something that I’ve seen in a lot of different shonen series, and that’s the part where everyone pairs off one at a time to fight. I think we all know that routine by now, since so many manga rely on it to give the cast something to do. But I never expected to see it happen in Rosario + Vampire. I suppose I’ve been listening too much to the people who only know about the anime, which never grew up the way the manga did. The thing is that even during Part II, the series never felt like a traditional shonen, since the fight scenes were never the primary conflict; they were just the result of it. So we never got too many characters who appeared solely to be fought. If we did have those sorts of events more often, though, I think these chapters would feel very grating and unnecessary. But instead, I’m looking forward to these fights, since we haven’t had many good opportunities to see the cast in action yet.

Right at the beginning of Part II, we were told that Kurumu and Mizore had been in training for most of the summer so they could try and keep up with Moka. The problem was that this wasn’t apparent from their actions, since it was still Inner Moka and Ghoul Tsukune doing most of the tougher jobs. They got their occasional moments in the spotlight, but these weren’t very common and since their important character moments increased in number compared to Part I, it’s easy to think they were always capable of that and never truly got any stronger. That’s why I’d like to see these upcoming fights, and why I’m hoping these girls are as strong as they’ve been built up.

The current fight against the Raijuu shows what I’m talking about. Before, we hadn’t gotten much out of Ruby in regards to her fighting prowess. She started as a strong villain, but so did most of the girls, and it’s easy to for even the writer to forget things like that after all this time. And at first, it looked like she was only in this fight because her strengths matched up with the enemy (he specializes in unleashing electricity, she specializes in taking it). But then Ruby goes on the offensive, and we see the sort of skills she’s been holding in all this time. Of course she’s been training with the old master recently, but it’s all based on skills she’s known all along. Luckily, it’s also not a simple match where the enemy loses in one combo, as he recovers and Ruby has to pull out her even stronger techniques.

The one thing I’m concerned about with these coming chapters is the time the fights will take. Before this chapter came out, I thought the fight would end here, but it doesn’t. It almost certainly will next chapter, but this is still only the opening match, and the next fights could easily be just as long. I assume there will be several at once, or they’ll have Tsukune rush to find Moka while the other fights are going on, but this is still a lot longer than story arcs in Rosario + Vampire usually last. And if they don’t last that long, then will we truly get to see the other characters cut loose? I’m hoping the next chapter or two will clear that up, but as long as everyone gets their turn, it should still be the sort of action these characters has been lacking.