Princess Jellyfish – The Sound of a Million Squees

Team Inari got their third X when they guessed “A Bath”.

This is one of those events you don’t expect, but always silently hope for. The relationship between Tsukimi and Shuu has always been one of those awkward ones, although it’s hard to say how close they actually want to be. Both of them have far too many boundaries for their getting together to be in any way simple. Keep in mind that Shuu has been mostly single his whole life, and changing that kind of closed off mindset can’t be easy. This hasn’t stopped Hanamori from deciding for himself that the two of them should start going out, which would feel very intrusive if it wasn’t so amazing to hear. In spite of all their problems with closeness, I think getting to go out should be good for the two of them. END_OF_DOCUMENT_TOKEN_TO_BE_REPLACED 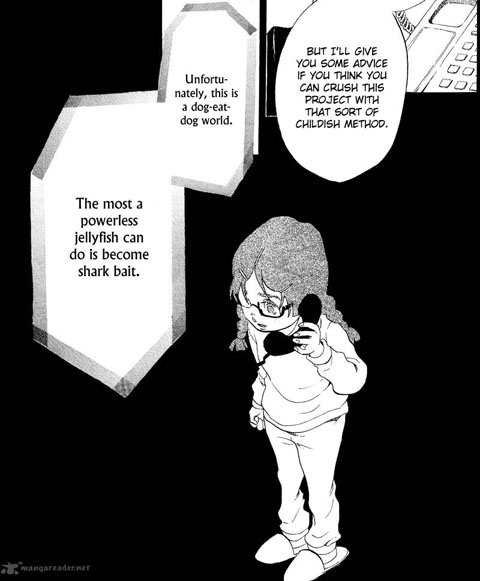 If this were a shonen, this would be where she runs over and punches Inari in the face!

(Note: I started writing this before Chapter 41 came out, so in the off chance that something contradicts with that chapter, blame someone who isn’t me.)

I admit that I’ve always found Kuranosuke’s methods to be questionable. I assume most people have, since that seems to be the role he was cast as: the naive pretty boy who thinks he’s the wise old mentor. Most of his ideas are based around clever observations with little thought to practical application, such as dressing up the Sisterhood to make others take them seriously, while neglecting to address their fear of public speech. So his plan to set up a fashion show at the Nunnery seemed smart, but had rather obvious faults. Particularly when it came to the well-being of everyone except for him. I was questioning the sort of bad publicity he was creating for his family in the last few chapters, but somehow it never occurred to me how these events were affecting the other otaku until now. END_OF_DOCUMENT_TOKEN_TO_BE_REPLACED