Nisekoi – All The Planning In The World…

…can’t beat the impact of a single spontaneous comment.

The perfect thing to ask on Kirisaki’s birthday.

So, that happened. I love how completely casually this series can reveal important plot points to other characters, like back when Onodera and Ruri were told about the fake relationship. I still never expected anything on this level, because even with that history, there was never anything in this chapter to indicate any kind of confession was coming. It’s just something they decided to share all of a sudden.

Even with this revelation, I don’t think things are going to get resolved quite yet. With the number of different childhood promises that have happened, there’s no telling what the actual truth is, even if these two so firmly believe in their own meeting. I’ve actually heard a few people saying that Onodera is “lying”, but I wouldn’t go that far. For all we know, Ichijou and Onodera really did make a promise ten years ago, or else Ichijou made more than one. There’s still enough in the air that this hardly feels like any sort of climax. Besides, there’s still the issue of the two warring families, which I suspect is being kept in the sidelines for now so that it can be sprung on the characters when it’s most dramatically appropriate. Like when two characters are about to kiss or something. 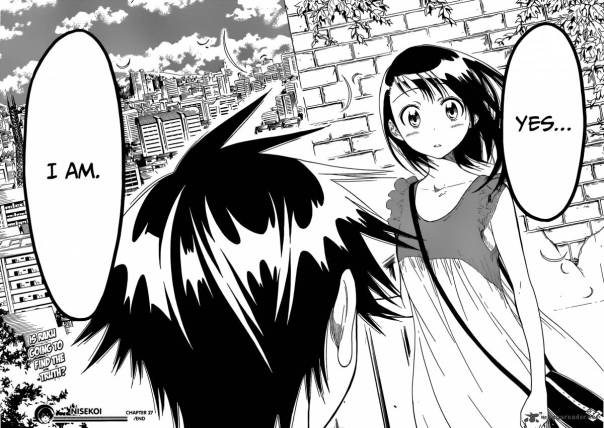 Huh. You know, I thought I would have more to say about an event like this. We were all waiting for it to be revealed, but somehow I have difficulty coming up with words. Maybe I’m still in disbelief, or maybe I’ve seen enough dragged out confessions to know that this probably won’t be the end I was expecting. If one of these two attempts to back out of the confession next chapter, I wouldn’t be shocked. I can see it now, with Ichijou’s hand on the back of his head while he nervously talks about how much he likes Kirisaki. I’ll probably have other things to say after one or two more chapters, but for now I suppose I’m happy if we can make any progress at all.