← This Week in Manga – Cutting The Knot
The World God Only Knows – What if God Was One of Us? →

One Piece – Breaking The Law 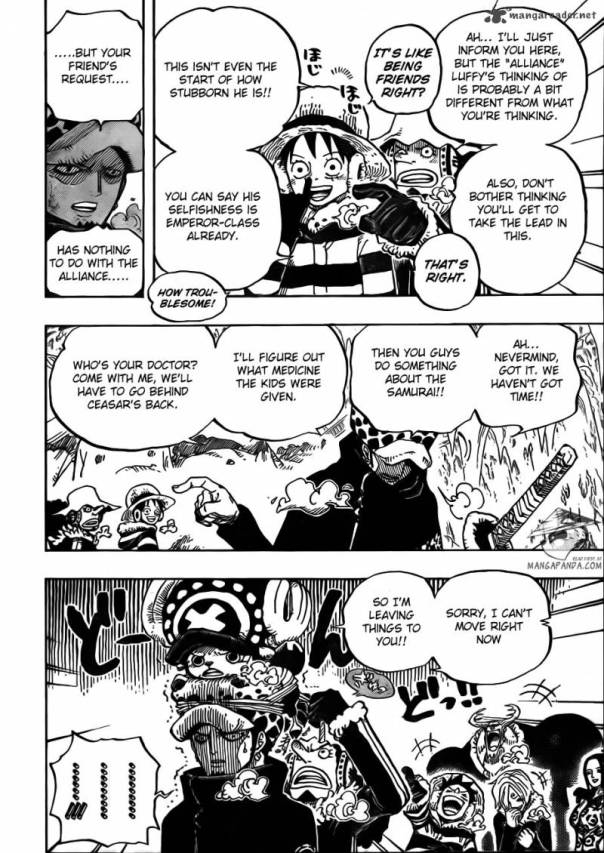 “No, I will NOT form Big Emperor with you people!”

I’ve been doing a little thinking about the distant future of One Piece. Most of what I’ve realized is that there’s very little about the end of the manga that can be guessed at this point. Everyone has their own little theory about what the titular treasure will turn out to be, but I’m still pretty sure we won’t be able to guess it until five minutes before the treasure is found. It’ll be the sort of thing that won’t make any sense until then. The main point of my thinking, then, is that I have a rough theory as to how the overall story will progress. We’re all sure the series will end with Luffy becoming Pirate King, right? Well for that to happen, he has to reach the level of one of the Yonkou first. How is he going to do that?

Most of what I know about the Yonkou comes from Whitebeard. We learned quite a bit about how his crew operates from the battle at Marineford, but something I found particularly interesting is that most of the pirates fighting with him were not technically members of the Whitebeard Pirates. The ones who emerged at the center of the island were his crew, but the rest were mainly crews allied to him. That’s a big part of how he was able to attain enough power to control a quarter of the strongest oceans in the world, because no matter how strong he is, there’s only so much his crew could do without forming these alliances. What little I’ve seen of the other Yonkou, and what little I know about warfare, would suggest they operate in a similar manner. So if Luffy ever wants to achieve the same level of influence, he doesn’t just need his crew to get stronger; he needs to start getting allies in the New World.

This occurred to me a little while ago, so I was particularly happy to see Luffy and Law form an alliance in the last few chapters. Of course this is nowhere near as close as the alliances in the Whitebeard Pirates, and I’m still expecting Law to at least consider betraying Luffy before the arc is over. But this is where the groundwork is being laid for the scenario I think will happen later on, with the Strawhats being the head of their own army. If they really needed to, they could call on the Sun Pirates and a good deal of the Fishman Army already, and that’s just counting the people we know are nearby. If there’s one talent we know the Strawhats have, it’s getting others to follow them, and if I’m right, we’ll be seeing that talent start paying off big time.

← This Week in Manga – Cutting The Knot
The World God Only Knows – What if God Was One of Us? →