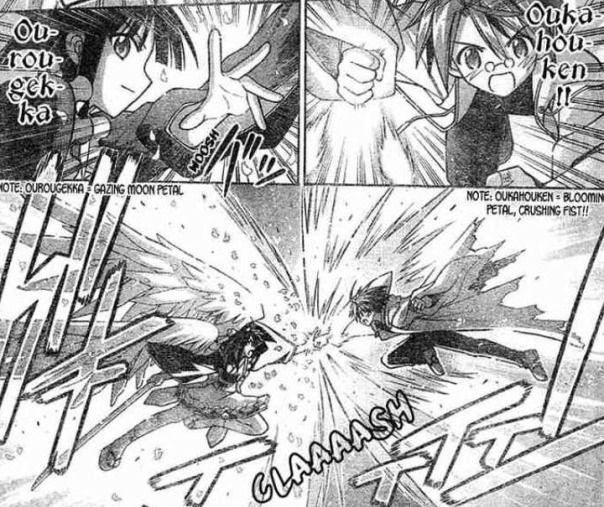 A visual representation of today's match. Except with three Setsunas.

Hello and welcome, voters coming from the Aniblog Tourney. There are soft drinks and cookies in the back.

The post you are reading right now was written more than a week ago on the 18th. The reason for this – and the reason my blog hasn’t had as many posts lately – is because I’m currently in the middle of finals. In fact, if you’re coming in as soon as this post is released, I should be sitting down and writing my last exam for the year as you’re reading this! Here’s hoping I come home to some good news. ^_^

I’ve got an About page up that gives information about the site, but I’ll give you the abridged version here. My name is Yerocha, and I’ve been a manga and anime fan for several years now. Shades of Grey is a blog I started where the main focus is on manga. The average post is done in response to chapters from the series I read, although rather than simply discussing the events of the chapter, the focus is on how those events relate to the series as a whole, or sometimes what they might mean for the future. There’s almost no recap of chapter events because it’s rare for the posts to require it.

I’ve selected a few posts from this site that I feel both cover the kind of writing the site has and the selection of manga discussed here. Keep in mind that these posts will usually include spoilers from the manga in question:

* First would be my rankings of the manga that I’m currently reading. It was written in December, so there are a couple series missing, but the information there is still relevant.

* A tribute to a manga tragically cut short with Mahou Sensei Negima – Finale.

* A discussion on trying to out-predict the author in One Piece – Wild Mass Speculation.

* One of those chapters that affects you more than any other, The World God Only Knows – Chapter 166.

* Looking at a brand new series in Nisekoi – First Impressions.

There’s one other feature of this site that I think might interest everyone: video reviews!

These are a special kind of post that I’ve been working on for some time. It’s my way of getting across my feeling toward whole series and who should be reading them. You can find them in the Videos or Manga Reviews tab to the right, though I thought I’d bring one here to demonstrate.

I suppose that’s everything I wanted to say here. Feel free to go check out my opponent, Anime Evo, as well. They’re a pretty good site, although I still hope you’ll vote for me. I should be back to posting regularly after the 27th, so I hope you’ll stick around and see what I have in store.