← Rosario + Vampire – Can We Panic Now?
Transitioning From Anime to Manga → 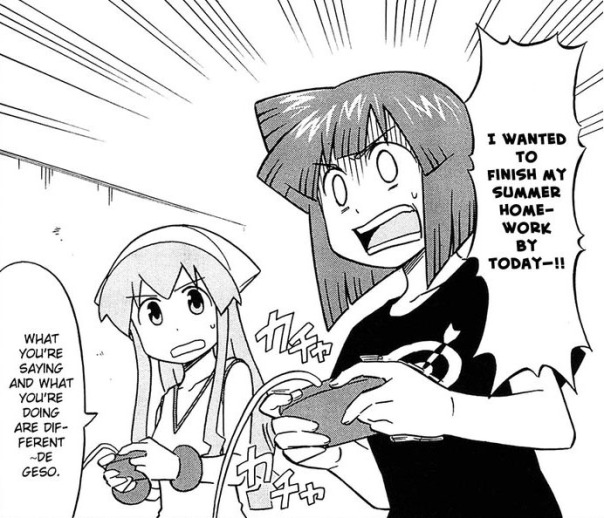 Well, it’s that time of year again. In a few weeks I’ll have to write my finals. It’s been a rather annoying semester, and I really need to put some work into some of the remaining assignments I have before then. Lab writeups suck.

What does this mean for the website? It’s hard to say, since I’ve grown into a habit of doing schoolwork during the day and working on posts at night. Aside from the actual week of finals, it’s entirely possible the amount of posts might go relatively unchanged. I’m not sure if that says more about my overall productivity or my regular update schedule.

Just know that I won’t have any major posts ready aside from two that I already have partially finished. The first is “Transitioning from Anime to Manga”, and that should be ready in a day or two. The other is my video review of Psyren, which I finished writing yesterday and should record soon. Of course those are meant to be done soon, which is why I made exceptions for them and not other long posts. After that, my hands should be mostly tied until the day of my last exam, which is April 27th.

…which, in an interesting coincidence, is the same day as my match for the Aniblog Tourney!

I’ve been looking forward to this for a little while, even after hearing about some of the drama that surrounded the last one. It’s going to be fun to root for my favourite websites and see how everyone performs. I also hear most participants get a lot of exposure, so there’s that too! I’m a little worried about how I’ll perform, though. A part of me was hoping my first round opponent would be some new blogger who looks like everyone else, but instead I got matched up with a good website, Anime Evo. And if I manage to beat them, I go against Shinmaru in round 2!

As nervous as I’m getting, this does feel like how most shonen tournament arcs begin. Starting against 3 opponents at once during a time of turmoil before facing a popular fighter in the second round. If the tourney gets interrupted by a ninja attack during the semifinals, I won’t be all that shocked anymore. It’s too bad for the way the times came together, or I might be able to prepare something more. School does come first, of course, so if this website suddenly goes much quieter, know that I would much rather be here.

← Rosario + Vampire – Can We Panic Now?
Transitioning From Anime to Manga →