Sukitte ii na yo – You Are Not Sawako Kuronuma 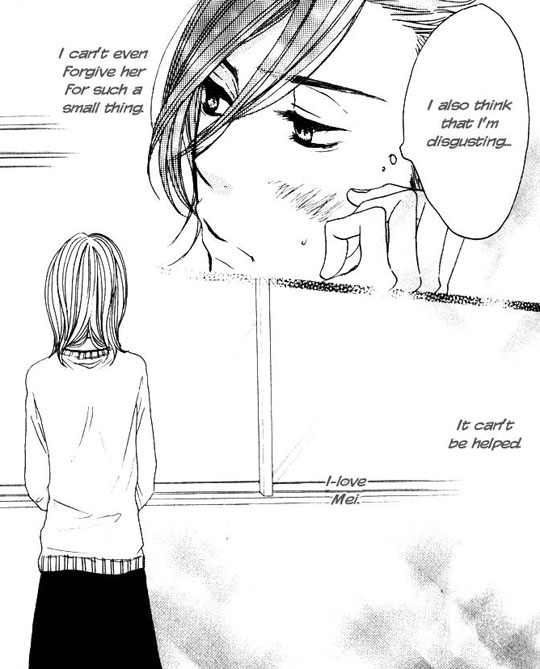 You know, I’ve been trying for a little while to figure out why I’ve had so much trouble connecting to this manga. After all, the whole reason I started reading it was because people compared it to Kimi ni Todoke, and after reading I can see where the comparisons come from. The heroine is a social outcast who attracts the attention of the most popular guy in school, and through this she ends up attracting a number of friends. The first big difference, though, is that Mei hooks up with Yamato extremely early in the series, which should please those who disliked the slow pace of Kimi ni Todoke. And yet somehow, I couldn’t find myself getting into this series on anywhere near the same level. I think this chapter has finally shown me why that is.

Lets look at Mei, the heroine of the series. She may not get mistaken for the legions of Hell, but she’s still the kind of person most people like to ignore. The big reason she starts becoming more involved with the other students is because they start talking to her. The other girls met her because they liked Yamato, and Yamato started talking to her because…he…has a fetish for quiet girls? I don’t know, I still have trouble understanding why he would go out with Mei so quickly after meeting her and not someone else. I suppose the implication is that the other girls aren’t his type, but that still brings up the issue of the suddenness of their relationship.

This is the problem with Mei’s character: things just happen to her. It never feels like she’s putting forth the effort to have things go her way, but that she’s just going along with the flow. This may fit her initial loner personality, but it stops being interesting rather fast. For example, last chapter Yamato gets annoyed at Mei for talking to another guy about sex. He never discusses this with her, but simply ignores her right after finding out. And yes, that’s where the picture from the Current Manga Rankings came from. This chapter, he slowly decides that he shouldn’t be feeling this way over something so small, although he’s still bitter about it. Notice how little Mei was actually involved in any of that. The beginning and middle of a romantic squabble, and they all just kinda happened to her. I don’t think it was even her idea to talk about sex in the first place.

This is where a lot of people miss the point about Kimi ni Todoke. Sawako is a girl who has trouble communicating with other people, much like Mei except arguably worse. She could probably solve most of her problems very quickly if she were able to speak her mind more clearly. Here’s the difference, though: she may have an extremely difficult time getting out the words she wants, BUT SHE STILL DOES IT! In some way, it’s always her own actions that let her make friends, find love, and convert annoying classmates into slightly better people. She may have others to help her, but they only show her the correct path. She’s still the one walking down it, and it’s the difficulty she has taking those steps that makes her story endearing.

I’m not trying to say Mei never does anything for herself, but the amount of things that get given to her are rather unbelievable. I can’t think of very much that she accomplishes on her own, and the simple fact that her achievements are so easy to forget says a lot. The story is trying to go for a heroine who the girls in the audience can project onto, but there’s only a select few whom I can see identifying with her.