It’s been getting more and more difficult to think of what to write for these milestone posts. I remember feal87 saying that once I’m six months old, I’m past the zone where new blogs stop updating prematurely. At the time, six months felt like a long way away. Well now that I’m here, the question remains as to how I still feel about blogging. The truth is that I think it’s gotten much more interesting as I’ve started talking to other bloggers. I wonder if part of the reason some people have trouble starting up blogs is because they can’t imagine anyone who would read their posts, because as I’ve gotten closer to people through Skype and the SCCSAV, it has been easier to write what I think.

Of course the other reason I can see myself still blogging is that there’s still so much to talk about. This should be the third post I’ve put out in the last three days, and I’ve still got things I’m working on. At some point soon, I really need to talk about Negima‘s sudden departure, and when the time comes I’ll be writing the Finale posts for both it and Bokura ga Ita. I’m also preparing a post for Nopy’s Guide to Anime, and I should have that finished as soon as I can remember exactly what I wanted to say. And this is before I count the normal chapter posts, which I’ve got a few ideas for even as we speak

I’m also still working on my review of The World God Only Knows. It’s fully written right now, and I plan to have it out within a week. After that it will most likely be Fairy Tail, since I’ve promised that one to a few people and I have quite a few things to say about it.

Something I should also mention is that on Saturday, I’ll be going on a small trip for school-related reasons. It should last a few days, and I’m not completely certain how busy I’ll be during that time. It’s entirely possible that my blogging schedule will be exactly the same, but it’s just as possible that I won’t be able to get online for that period of time. So if I suddenly disappear for about a week, you can blame it on my school.

I suppose that’s all I have to say. I was never the sort of person who was good at talking about myself. This may be why I have so much trouble asking about people’s blogrolls. I guess that’s two things I should work on in the next few months: time management and self confidence. Well it’s been a good time here, and I hope you’ll all still be reading and blogging six months from now. I guess I’ll just leave off with some random pictures from the series I’m reading.

It's still not as scary as regular Chopper acting like Monster Chopper.

She could have been a great tsundere. "I didn't do this for you, says Misaka as she pictures us on a date."

Before meeting Reiko, Nyanko-sensei got into a lot more mischief. 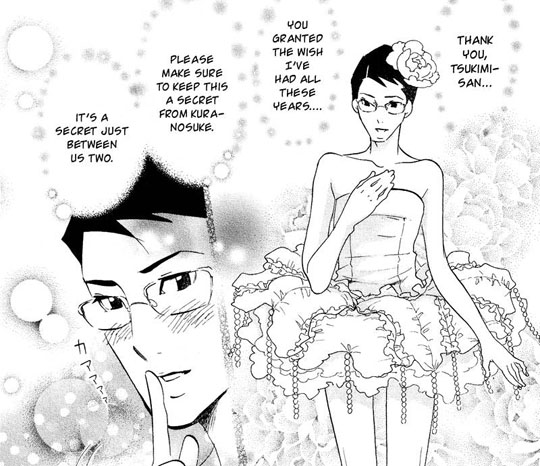 What happens when misunderstandings go too far.

Out of context Ika is the best Ika.