The World God Only Knows – Chapter 166 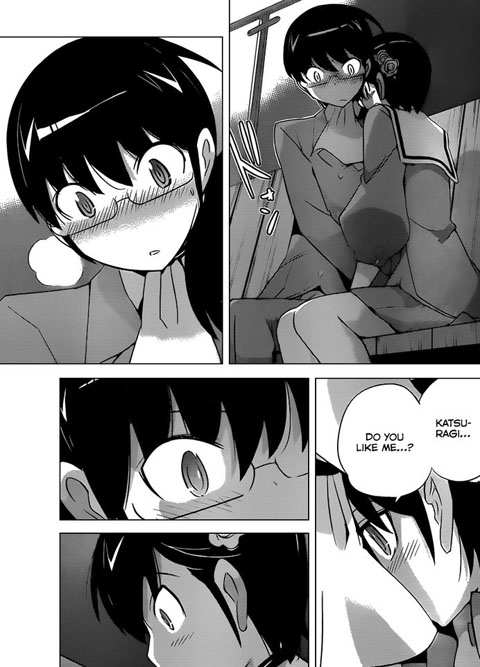 I’ll openly admit that it takes a lot for me to be emotionally moved. I’m not sure how long I’ve been that way, but it’s true. A lot of the time, I see something and know how I’m supposed to react, but it’s not often that I go along with the feelings I’m given. Maybe knowing that sort of thing is part of the problem, but I’m also the sort of person who tries to fully comprehend everything I see. Looking back on this chapter of The World God Only Knows, I can understand why Keima acted the way he did. Right now, the most important thing for him and everyone around him is finding that last goddess (who is in Ayumi, for those unaware). He discovered that when he was a little too far into Chihiro’s route and was forced to backpedal hastily. On some level, I knew that even when she was confessing to him, he wouldn’t be able to accept what she was saying.

But I didn’t care. I wanted Keima to kiss her and embrace her and say that he loves her, even though it didn’t make sense.

I’ve seen more than my share of romantic subplots, but I don’t think I’ve ever reacted to them this strongly. I read and watched lots of harem series before, so I should know how this goes. The main character can’t get together with one of the girls at this point in the story, or it would alter the dynamic of the story too much. That’s the way it’s always been, and I never had any reason to doubt that this was the case here. But there was something about Chihiro and Keima in this scene that hit me hard enough to forget about everything else. The last thing I could accept was to see her heart broken.

Of course the reality of the situation set in when Keima had to let Chihiro down. In my last post, I assumed that he was proud enough to not break off a relationship in any serious way. I was wrong. Maybe it was inevitable, but holy fuck, that was a harsh way of going about it. I can’t see how he could hear Chihiro’s honest confession and turn it around on her that fast without feeling something. Next chapter, we absolutely need to see something from Keima – anything – that can show us he still has feelings. I would like to think he hates himself for this behavior, but we still need to hear it from his mouth.

Of all the series that I read, I’m amazed that it’s a manga like The World God Only Knows that can get me the most emotional. As I read through it initially, I could tell that the mangaka was getting better at writing romance as he went along. It just never occurred to me how much better he would get. I’m not normally the type who supports one pairing over another, but maybe I just haven’t found anyone really worth pairing until now.

Huh. First my favourite girl was Kusunoki. then Yui, and now Chihiro’s taking a run at the title. Guess Haqua and Diana have some catching up to do.

Lastly, you know in my 3 Month blog entry I said I was having trouble deciding what series to review after Chobits? I’m not having trouble anymore. This chapter helped put my thoughts in order.